A “Heritage & Society” report published by Historic England acknowledges that living in heritage buildings provides residents, plus a wider local community, with a greater sense of identity, purpose and history. These qualities also inspire the specialist tradespeople and professionals who bring restoration and repurposing plans to life, particularly our Building Conservation Specialist, Peter Wade FRICS.

We wanted to find out what motivates our client, Weston Homes, to be involved in such projects.  First, here’s a little of the hospital’s history to understand why it is of such significance.

The hospital was named after Prince George, a cousin of Queen Victoria who at the time was Duke of Cambridge and head of the British army. Its iconic clock tower housed a huge bell captured during the Crimean War (1853-1856). The overall design was based on the Royal Herbert Hospital, which was the first purpose-built military hospital in the country. The Herbert, now also repurposed for residential use, is located on the edge of Woolwich in southeast London, just a few miles from Murray Birrell’s offices in Bromley.

From its opening on 18 July 1879, the Aldershot hospital played a leading role in military medical achievements. In WW1 it was the first British hospital to receive casualties directly from the Western Front in France, and by the end of 1915 it was home to the first plastic surgery unit in the country. It also received D-Day casualties in WW2.

Film footage of the derelict hospital interior was included in an episode of BBC’s “Who Do You Think You Are?” After being wounded in 1917, a great uncle of the Doctor Who actor Jodie Whittaker recovered at the Cambridge Military Hospital before electing to rejoin his regiment in France.

After WW2 the hospital pioneered supplying portable operating theatres and supplies for frontline duties. The hospital was still in use to receive casualties from the Falklands conflict in 1982, some of whom were visited by The Queen.

With the general decline of Britain's military commitments, the hospital was given a new role when civilians were admitted. By the time it closed in February 1996 it had an A&E unit and children's, plastic surgery, general surgery, burns, gynaecological, intensive care and orthopaedic wards. 18 years later in 2014, permission was granted for conversion to provide housing.

Elegant original elevations have been reintroduced, and spacious rooms, high ceilings (up to 15.5 ft from the floor) and original features including fireplaces (decorative only), panelling and staircases were retained and incorporated into the new homes.

Other historic hospital buildings will be converted to provide two and three bedroom apartments, alongside newly-built apartments and houses. Around the restored heritage buildings there will be semi-private gardens and courtyards, blending open lawns and trees. In total, the AUE will deliver up to 3,850 new homes across a site measuring 370 acres.

Why are Weston Homes involved?

It  had already been decided in plans for the much larger AUE scheme submitted by Grainger, the UK’s largest listed residential landlord, that the main hospital building would be retained and repurposed as mixed use residential units and administrative offices.

Refurbishing and repurposing heritage buildings brings additional challenges for a property developer. There is always the possibility that things will crop up as work progresses, though Weston Homes are able to make judgement calls on what to allow for based on their previous experience and technical expertise acquired in this field.

Weston Homes’ founder and Chairman, Bob Weston, told us that having already worked on three hospital refurbishment projects, and generally finding the records or heritage of listed buildings to be fairly well documented, Weston Homes acquired the 12 acre Cambridge Military Hospital site with a pretty good idea of what they were entering in to.

“The company is passionate about these types of heritage projects,” he said, though from the outset their involvement “remains based on a sound business case, no more or no less.”

Work at the site

Added to Weston Homes’ experience and expertise is that of our Building Conservation Specialist, Peter Wade FRICS. Having spent the last two years getting to know the Cambridge Military Hospital, he sometimes found it daunting to witness the damage that has been inflicted on this large group of historic buildings, both by neglect and by inappropriate extensions.

The buildings remained empty for many years after the military vacated the site, and with roofs left open to the weather it is surprising that more damage has not been caused.

Perhaps this is a testament to the original Constructors and the materials used. Nonetheless, the flaking paintwork on deserted corridor and stairway walls still confirmed the nature of the busy place that it had once been. 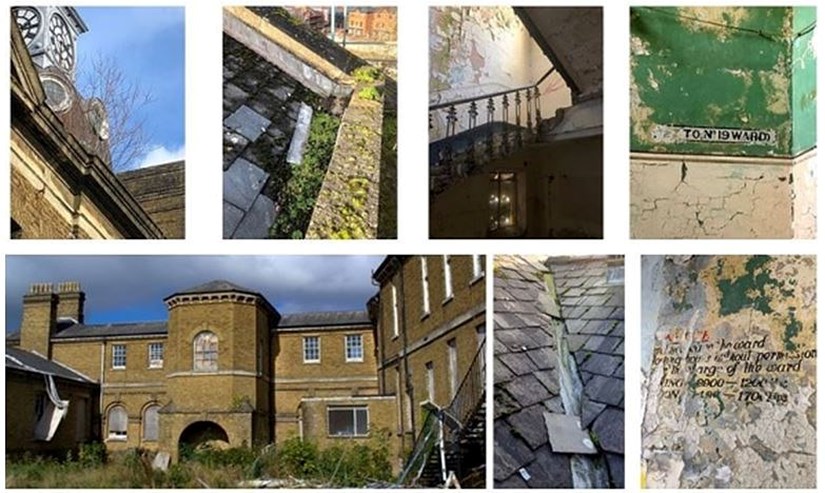 As the skins of brickwork were peeled back and the roofs removed, the works revealed substantial construction including the use of 225mm inner leaf cavity walls with terracotta ties dating back to 1870, and extremely large roof and floor timbers.

Cast and code 8 lead is widespread along with the use of Welsh slates although many slopes have been replaced with more modern manmade slates. 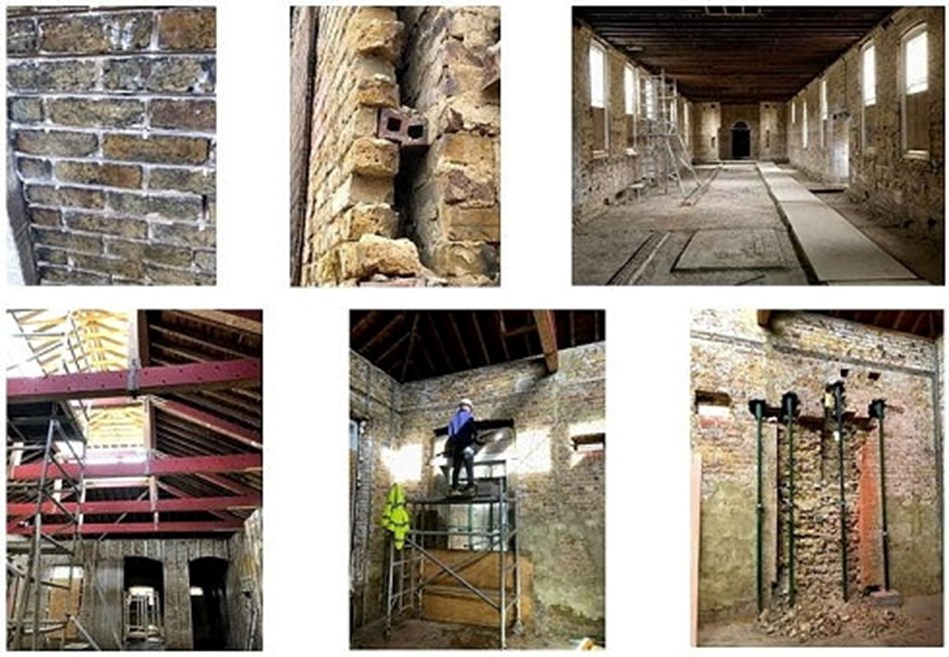 It is an added challenge to maintain the integrity of heritage building work by keeping in mind the original construction methods and materials used, yet bring it in to compliance with today’s regulations and functional requirements. For example, due to the amount of damage and the number of the substantial double hung sash windows, a decision was taken early on to replace all windows with double glazed and draught-proofed timber double hung sashes meeting current Building Regulations.

Where brick arches have previously been removed or damaged beyond repair, new brick slip arches with concrete backings have been delivered ready-built to site and built-in.

Recent extensions built onto the Wards, including use of concrete slabs, have now been demolished and this revealed significant damage to the original brickwork and arches. After discussion, it was agreed that the least disruptive repair would be to build new brick skins over the damaged areas, and this approach was approved by the Conservation Officer.

At the Water Tower, a separate detached four storey building, the original cast iron segmented water tanks were built in as the structure was erected. Over the years the tanks corroded which exerted huge forces onto the brickwork The two upper storeys had to be demolished to allow the tanks to be removed. Careful repairs used conservation techniques recommended by Peter Wade FRICS.

Work is well advanced and Weston Homes have begun their marketing programme to sell the first available properties, set in communal spaces with landscaped gardens.

Murray Birrell’s involvement will continue through to final sign-off of the project, and there is still work to do to preserve the integrity of some original buildings for their successful repurposing in the new scheme. Some replacement elements are being pre-formed offsite and delivered for installation, though for much of the work it has to be done in-situ, with a requirement to ensure contractors understand the necessary level of care.

“My interest in historic buildings goes back 40 years and I am often overwhelmed by some of the buildings I get the chance to work on. This place is one of those. Without my experience and accreditation in conservation I would rarely get the opportunity to advise on these buildings. There are still areas within the Cambridge Military Hospital where we are reminded of its function over many years, such as the painted signs to the Wards and some of the operating equipment.

It has been a privilege to be involved with the redevelopment and refurbishment of the site by Weston Homes, and to see it coming to life again as people now move into the stunning apartments. The entire area is set to become a small new town in its own right with the Cambridge Military Hospital watching over it from its vantage point.”