Director Keith Murray FRICS and Associate Director Sam Field MRICS have specified and overseen many projects in this part of London. This experience is valuable because in addition to conservation area sensitivities, which mean any new works must conform to the existing special architectural and visual qualities, there can also be access issues due to some of the buildings’ immediate proximity to what remains above ground of the River Neckinger (one of London’s “lost rivers”).

We managed a recent Planned Preventative Maintenance roof survey at Scott’s Sufferance Wharf, a 1980s development to the east (above, on the right), which fronts on to Mill Street and Jamaica Road. The survey was made easier with the aid of drone surveys to inaccessible areas. Otherwise, the tight river frontage with buildings immediately adjacent to the tidal dock, which is now an almost unique feature in London, means it is always necessary to obtain permission from the Port of London Authority to place scaffolding on the dock bed.

Java Wharf, St Andrew’s Wharf and Christians Warehouses are Grade II listed Victorian warehouse conversions. Our work on them has included the inspection of existing premises and preparation of the specification for external repairs and redecoration. Acting on behalf of the management companies, Murray Birrell’s further role was to administer the external repairs and redecoration contract. The properties were fully scaffolded and the works were carried out on a Sectional Completion basis under a JCT formal contract. The works included Doff cleaning to the stonework, metalwork repairs to the balconies, repainting of external elements and roof repairs. 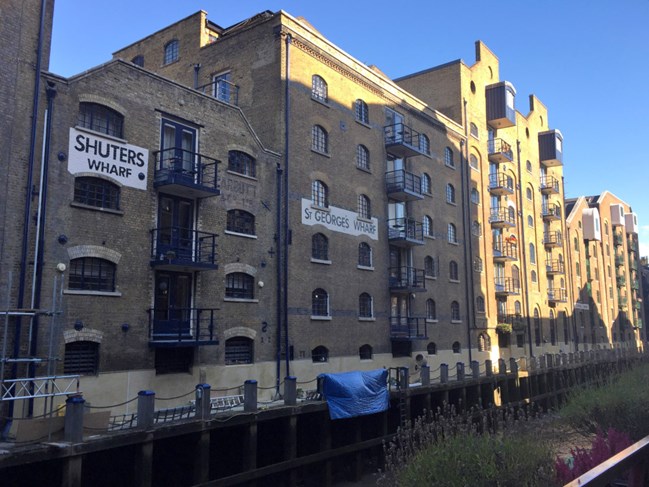 The nearby Anise Building and the adjoining Coriander Court were also Victorian spice warehouses, and in 2000 both buildings were converted to residential flats with some office space created at ground level. Many original features were retained in the conversion, including timber and cast-iron structures and brickwork. We completed work on the exterior of the Anise Building in 2019, and will soon start external repair and redecoration work on Coriander Court which will be overseen by Senior Building Surveyor Ray Osborne.

Other projects have included working with Collins Contractors at Crown Apartments; roof work at the Conran-designed conversion of Cinnamon Wharf; and at Lloyds Wharf, Hobbs Court and the Flag Store apartments. The Flag Store was built in 1899 by flag and tent manufacturers Benjamin Edgington. 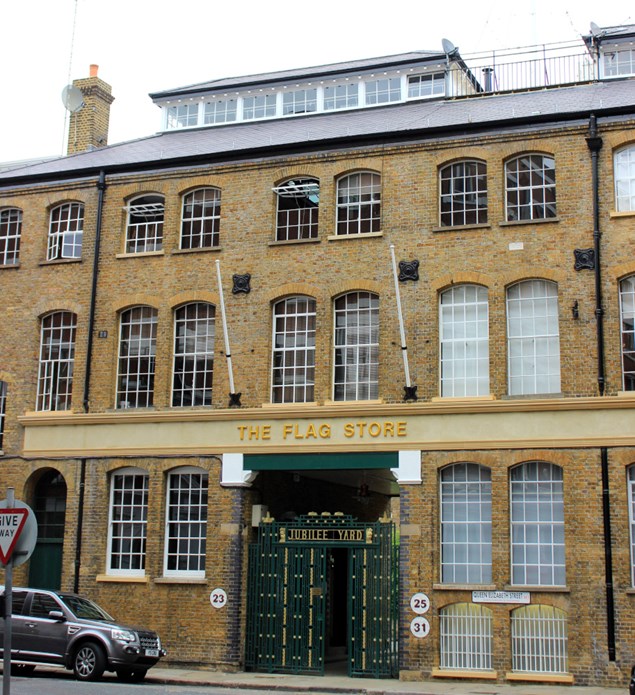 More about the Conservation Area’s history

Today, the winding, narrow streets among the large expanses of brickwork of the former wharf buildings are reminders of a bygone age, and give the area a charm that pulls in many visitors. The numerous riverside restaurants and bars are integral to the area’s appeal.

St Saviour’s Dock is a part of Bermondsey which was mentioned in the Domesday Book (1086), the Norman invaders’ inventory of the value of the new country they had acquired.

The original settlement here was named “Beormund’s Ey, or island,” and it sat on high land amid marshes and streams that almost surrounded it. Bermondsey became part of a royal manor belonging to King William and consisted of a settlement and farmland. There was also a new church, St. Saviour’s, around which Bermondsey Abbey was founded in 1082.

Between 1066 and 1485 part of the area near St. Saviour’s Dock was owned by the Knights of St. John of Jerusalem, who had water mills there. The area was called St. John at Thames and the name eventually became contracted to Shad Thames. The tidal creek serving the abbey was named St. Saviour’s Dock after the Abbey Church. The water powered Bermondsey Abbey Mill, which ground corn and is the origin of the name of the adjacent Mill Street.

Henry VIII’s dissolution of the monasteries between 1536 and 1541 in his break from the Roman Catholic Church ended the Bermondsey Abbey. The river frontage gradually moved over to commercial use. More people moved into the area, building on land that had previously been market gardens.

Bermondsey became London’s centre for the leather tanning industry when it was banned from the City of London due to the horrifically smelly processes involved, including the use of dog faeces to soften the skins and hides. The combination of a good water supply from the tidal River Thames, oak trees and plenty of space nearby to keep animals led to Bermondsey producing one third of all the country’s leather by the 1790s.

Business peaked in the mid-late 19th century before heavy development and exhaustion of local resources caused a general shift of the leather trade to the north of England, where labour was cheaper.

The area’s heavy development during the 19th century meant overcrowding and disease among the poorest residents, living amongst the stinking tanneries, were constant problems. Charles Dickens mentions Shad Thames in Oliver Twist, which was published in book form in 1838. The area included the largest warehouse complex in London, and warehouses at St Saviour’s were reputedly the setting for Fagin’s den. 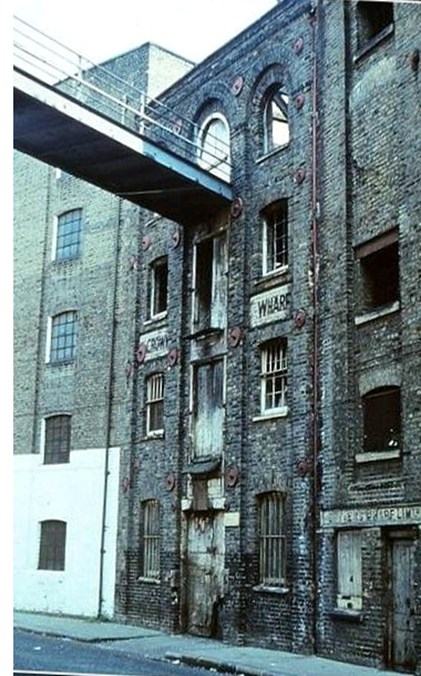 The warehouses were completed by 1873, and were used to store huge quantities of tea, coffee, spices and other commodities. Buildings named after cinnamon, cardamom, fennel, caraway, ginger, cumin, tamarind, clove, anise and coriander are a reminder of the area’s staple trade as it moved in to the 20th century.

It is said that on warm days some of the brickwork still gives off aromas of the spices they used to store, which were a welcome change at the time from the smells associated with leather production.

Slums were cleared in the 1920s and 30s, just in time for the Luftwaffe to contribute to local destruction in WW2.

Post-war reconstruction merged in to the introduction of containerisation and the decline of London’s docks, and the last warehouses closed in 1972. Yet again the local area had to transform.

Waterside locations became regarded as desirable places to work and live, and Shad Thames was boosted by designer and restaurateur Terence Conran, who established the Design Museum in a former banana warehouse, and opened a number of prestigious restaurants.

In the 1980s the warehouses began their transformation to expensive apartments, offices, bars and restaurants, galleries and premium retail space. St Saviour’s Dock, with its proximity to the City of London, became a cornerstone of the fashionable district people experience today.

Working in a built environment with such a rich history certainly gives us a buzz. To climb 10 metre scaffolding to touch and inspect structures that haven’t been within anyone’s reach for maybe close on a lifetime accentuates our responsibility of not just maintaining, but caring for these heritage buildings.

Our aim is for them to perform with integrity for current residents and businesses, and to be enjoyed by future generations.