We were delighted to see the splendid 18th century Grade II listed Rainham Hall on our television screens at Christmas. The BBC chose the building to feature as Ebenezer Scrooge’s house in their 2019 version of Charles Dickens’ “A Christmas Carol”.

Murray Birrell’s association with Rainham Hall goes back to 2017, when we were first appointed by the National Trust in connection with a Party Wall matter. We were subsequently appointed in 2019 to prepare a Quinquennial Inspection Report.

Rainham Hall was originally built in 1729 as a “gentleman’s house” for John Harle, a sea captain and builders’ merchant from South Shields. It was within sight of Rainham Wharf where his ships moored (though it has since silted up), and he imported marble and mahogany from Africa for its interior. Its splendid original mahogany staircase remains an imposing feature and was a key factor in the BBC’s choice.

The fees earned from the filming will go towards paying for the upkeep and maintenance of Rainham Hall and its associated buildings and garden. A themed tour of the place in January 2020 based on the filming experience gave insights into the care and attention required to protect the historical integrity of the building and its features.

The total time spent actually filming was compressed in to three days during April and May 2019. Though it required a lot more time than just those three days to get everything ready and make the outdoor scenes look like Christmastime, with fake snow that apparently could, and did, get everywhere. A lot of the action took place at night as well, which meant working long days for it to be dark in May.

Eagle-eyed viewers may have spotted that in some snow-scene shots the church next door had a snow-free roof. The time and cost to cover it with fake snow, or maybe even just white sheets that might have worked to fool the eye from a distance, made it prohibitive.

Directly over the road from Rainham Hall is a large pub called The Phoenix at Rainham. They were disappointed if they thought they were going to be seen on TV. Given that its appearance is totally out of keeping with that of Rainham Hall or the time period in general, it was hidden behind a large green screen backdrop on which relevant imagery was later superimposed to complete the outdoor scenes.

The front door to Rainham Hall has glass panels that were covered to give the impression of a solid wooden door.

Once inside, Rainham Hall’s entrance area was transformed into Scrooge’s parlour. The building is not home to any furniture collections, so there wasn’t much to have to remove.

The production team would have loved to light a fire in the fireplace, though any naked flames were strictly banned. Finally, after appropriate risk assessment form-filling to gain a special licence, Guy Pearce could be filmed as Scrooge sitting in his parlour with a single oil lamp. It’s not as if a fire attendant could be on standby with an extinguisher; the makeup team wasn’t even allowed to use hairspray inside the building!

All modern fittings naturally had to be removed. Radiators and electric lights were detached, though regulations required that the smoke and fire alarms had to stay. A BBC artist came to the building to study the wall colours, so they could faithfully replicate them. Plug sockets that were flat to the wall were painted to blend in, and the conspicuous alarms were digitally painted out of any scenes back in a production studio.

Benefits for Rainham Hall and the National Trust

In addition to the fees, the filming did a lot to raise awareness of Rainham Hall in the nearby area and prompted many local neighbours to follow up with an actual visit to the house and gardens for the first time.

There is also the possibility that other production teams will decide to use Rainham Hall on the strength of seeing the BBC’s “A Christmas Carol”. Though this wasn’t the first time Rainham Hall had been used as a location. Other occasions include the “Made in Dagenham” film about female Ford car factory workers going on strike. It had a scene shot in the garden at Rainham Hall that was filling in as the garden of No. 10 Downing Street.

Finally, although the staff were occasionally marooned in their offices on the top floor, or restricted to using a rather narrow and seldom-used former servants’ staircase, it was clear from talking with them in January that they were still rather excited about the filming that had taken place. A few days of inconvenience has widened their experience, emphasised the care and attention a property such as Rainham Hall requires, and given them some great stories to tell for a long, long time! 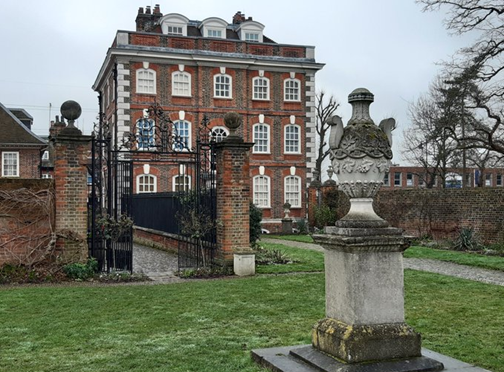